US for OKINAWA & PangeaSeed Art Exhibit


PangeaSeed & US for OKINAWA present 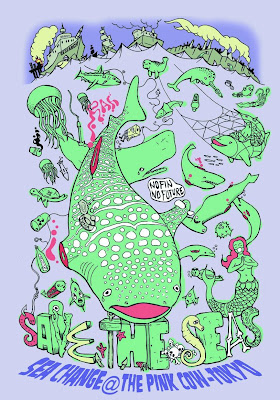 "Sea Change" - an exploration of the ocean`s beauty through music and art, our one-month exhibition will not only portray the aquatic marine life from the depth of the seas, but will also encourage our viewers to engage in more critical thinking about the current environmental and political dangers that our Oceans are facing today.

500 Yen donation at the door with live music, art, poetry
*delicious food and drinks available at the bar*

US for OKINAWA supports the work of free-lance journalist, Sonia Narang as she covers the topic of the bases in Okinawa. Please watch this short documentary to learn more !

Sonia Narang covers Japan for GlobalPost (Globalpost.com). She is a multimedia reporter who previously worked as a video journalist for NBC News, where she reported, filmed, and edited stories for the "Nightly News" and Msnbc.com. She was also an associate interactive producer at the PBS international documentary program Frontline/World, where she reported an award-winning multimedia series in rural India. Sonia’s video and print work has also appeared in Forbes, the San Jose Mercury News, and The New York Times Magazine. She has filmed and photographed throughout Asia, and she lived in Japan six years ago. 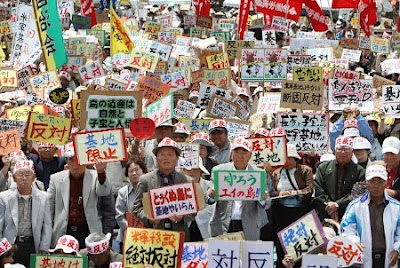 Photo by Jiji News Agency.
Posted by US for Okinawa at 10:57 PM No comments:

ACTION for OKINAWA , MAY 14th (Friday)

More than 500 people gathered on Friday, May 14th, for the Peace Action in front of the Diet Building in Tokyo - " NO Base Okinawa" gathering with various NGO`s such as Peace Boat, Green Peace, WWF, World Peace Now and more...
Interview with Mr. Teruya from Okinawa (Japanese)
http://www.youtube.com/watch?v=qJ1u0B6C1iM
５月１４日、国会前に４６０名が集まり、首相官邸に向け「普天間基地撤去」のコールが響き渡った。（主催、「沖縄に基地はいらない」全国同時アクションＴｏｋｙｏ）

SEE THE VIDEO ON YOU TUBE HERE